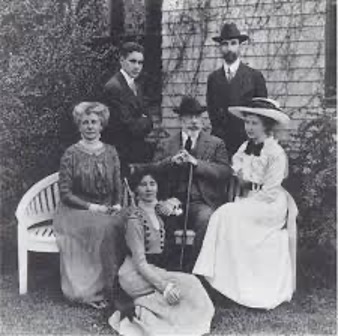 On April 26, 1877, William Bayard Cutting married Olivia Peyton Murray, the daughter of Bronson and Eliza Peyton Murray.  The first years of their marriage were lean.  They were obligated to live with his grandparents in Edgewater, and when they could finally afford to rent a house of their own in the city, it was extremely modest.  But upon entering the railroad business with his grandfather, Mr. Cutting’s fortunes improved considerably. 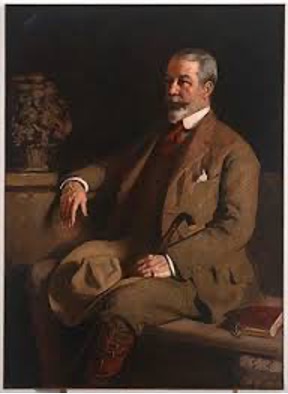 William Bayard Cutting was born on January 12, 1850, at 53 Irving Place in New York City.  He and his younger brother Robert Fulton Cutting were raised by their maternal grandparents, Robert and Elizabeth Bayard, in a small town of Edgewater, New Jersey, after their mother’s death in 1852.

William Bayard Cutting attended Columbia College, graduating with the class of 1869, then went on to Columbia Law School.  Though he was admitted to the New York bar, he was lured away from practicing law as a profession by his grandfather.  Robert Bayard was involved in the reorganization and development of the St. Louis, Alton, and Terre Haute Railroad when he requested his grandson’s help in managing the company.  When Mr. Bayard retired in 1878, William Bayard Cutting became the railroad company’s next president.  In time, he sold the company at a profit and accepted the directorship of the Illinois Central Railroad, and later the Southern Pacific.

Railroads were far from Mr. Cutting’s only business activity.  He was also involved in land and waterfront development, his chief concern being the acquisition of a large tract of near-worthless land in South Brooklyn.  By first establishing a ferry to it then connecting it by railroad, and finally upgrading the Bay ridge channel itself.  Mr. Cutting made possible the growth of the South Brooklyn waterfront and its superb system of docks and warehouses.  Mr. Cutting was also instrumental in convincing Congress of the benefits of making a new channel to the ocean through the shoals that extended from Coney Island.  This new channel proved of immense value to the port of New York.

Mr. Cutting was also director of insurance companies, banks, trust companies, vice president of the New York Chamber of Commerce, and a director of the Metropolitan Opera Company.  Besides his corporate work, he put his talents and money to work in an attempt to improve the quality of living for the New York City’s poor.  In 1879, he, his younger brother, and a business associate purchased a large area of property containing run-down tenements and up-graded them much to the satisfaction of their inhabitants.  The next year he organized the Improved Dwellings Association for the purpose of providing the poor with model tenements with affordable rents and prove that such an undertaking could be commercially successful.  This enterprise was the forerunner of many such projects in New York City and Suburban Homes Company.

Mr. Cutting was continuously employed in the management of charitable organizations, as well.  In 1878 he was elected a trustee of his alma mater, Columbia College (a post he served for the rest of his life) and in 1896 he became a director of the newly-organized New York Botanical garden.  An avid member of the protestant Episcopal Church, he served on its Board of Domestic and Foreign Missions, the General Theological Seminary, and a regular representative to the Diocese of New York.  One of his last acts was a generous donation to build a synod hall for the Cathedral of St. John the Divine.

William Bayard Cutting also sat on the Board of Directors of many other companies, most notably the American Exchange Bank, the U.S. Trust Company, and of course, the New York & Brooklyn Ferry Company, once founded by his grandfather William Cutting and Robert Fulton. William Bayard Cutting was a successful real estate developer at South Brooklyn, where he dug the Ambrose channel and opened Brooklyn Harbor to deep-sea shipping. He also developed slum areas on the East River into decent housing tenements for underprivileged families. With his brother Robert Fulton Cutting, he started the sugar beet industry in 1888, later bringing it under the umbrella of the Havemeyers’ American Sugar Refining Company. In 1887, William Bayard Cutting hired architect Frederick Law Olmsted to landscape “Westbrook”, a 1’000 acre river estate, with its later famous Bayard Cutting Arboretum. William Bayard Cutting supported numerous philanthropies, including the Children’s Aid Society, the Zoological Society, the Metropolitan Museum, and the New York Public Library. He was a trustee of Columbia University and a backer of the Metropolitan Opera Company. 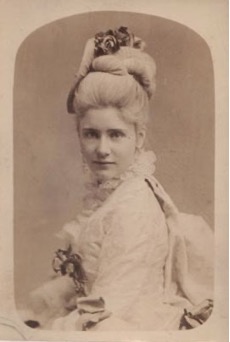 She was the beau ideal of an American debutante of the 1870s — pretty, amused by the world, and confident of her position in it. Olivia Peyton Murray‘s (1855-1949) landowning ancestors were in the Doomsday Book. Besides swaths of Surrey, later descendants owned tracts in Manhattan, notably Murray Hill. To characterize Miss Murray’s life as predictable isn’t really fair, but it is true.

Olivia Peyton Murray born in Ottawa, Illinois in 1855 to Bronson and Ann Murray, was wed to William Bayard Cutting in 1877.  Olivia had first seen her future husband when he had delivered the valedictorian speech at Commencement Exercises at Columbia University.  Shortly thereafter, Mr. Cutting had come to visit Olivia’s older sister but had been entertained by Olivia instead.  Since she was underage, Olivia had to wait seven years before marrying Mr. Cutting.  The Cuttings were obliged to live very frugally at first, staying for a year with Mr. Cutting’s grandparents in Edgewater, New Jersey before being able to afford a tiny apartment of their own.  The couple’s fortunes began to change, however, when Mr. Cutting was 25 and he assumed the management of his grandfather’s railroad and other business interests.

In the thirty-seven years of her widowhood, Mrs. Cutting devoted herself to philanthropic and civic activities, carrying on in the tradition her husband had begun.  She established Traveling Fellowships at Columbia University in her husband’s honor and created a Memorial Scholarship at Harvard in the name of her son Bronson who had been a member of the class of 1910.  Mrs. Cutting also contributed generously to the Emergency Unemployment Committee, the Citizens Family Welfare Committee, the Red Cross, and numerous others.  She was the head of the South Suffolk Chapter of the American Red Cross, and trustee of the East Islip Public School.  Her support of various projects to improve the parks and gardens of New York City earned her a certificate of merit from the Park Association.  She was also one of the founders of the Woman’s Auxiliary to the Board of Missions in the Episcopal Diocese of New York.

Although Mrs. Cutting maintained a townhouse on Seventy-Second Street in Manhattan, she spent much time at the Westbrook estate on Long Island.  She died at the estate on November 15, 1949, at the age of 94. 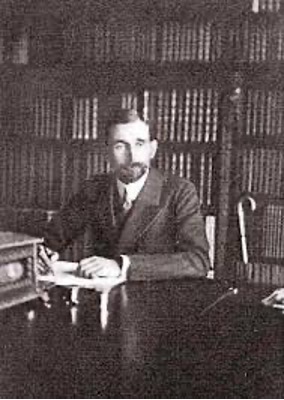 William Bayard Cutting Jr., the eldest of the Cutting’s four children was born in 1878; he moved into Westbrook at the age of eight.  He attended Groton Preparatory boarding school where his scholarly achievements presaged his success at Harvard where he earned a place in the first group of scholars three years in succession. He dropped out of Harvard after his third year to work for the American ambassador in London.  William Jr. was a scholar and an athlete.  He was curious about nature, loved life, and was exceptionally brilliant.  He learned from his father “who was a modest man with good taste and solid beliefs”.   Two gifts of his rich nature helped him through his illness: his love of letters and his feelings for beauty.    The pitiful accident of his doomed youth gave him his rareness and his brightness, that was the undefinable essence of his soul.  It was this, perhaps, which at once made life so glorious to him, and beauty so divine, and pity so natural, and his friends so dear.  Cutting Jr. suffered from tuberculosis and died in Egypt in 1910 when he was 31 years old.  He was survived by his wife and daughter. 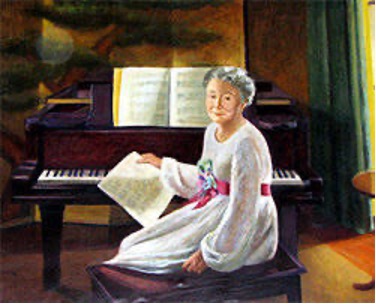 Justine Bayard Cutting, Mr. Cutting’s second child was born on August 7, 1879, and moved to Westbrook at the age of 7.  By the age of 21, she was an accomplished pianist and had married George Cabot Ward.  Converting to Roman Catholicism, she began to study the liturgical music of that church, an activity that would become a lifelong pursuit.  In their Westbrook home once stood a small organ in the northwest corner of the billiard-room.  There Mrs. Bayard Ward practiced the music she loved so dearly.  She wrote a series of books about teaching music.  In so doing, she created what has become known as the Ward Method of School Music, a system of music teaching which was even more influential in Europe than in America.

The School of Music of the Catholic University of America conferred upon her the honorary degree of Doctor of Music and named its music building after her.  Justine Bayard Ward died on November 27, 1975, in Washington, D.C. at the age of 96. 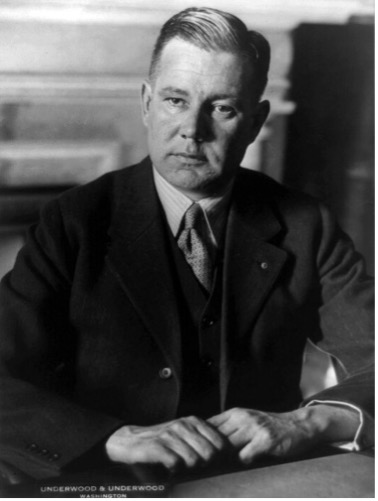 Bronson Cutting was born in Great River, Long Island, New York, on June 23, 1888, at his family’s summer home of Westbrook. He was the third of four children born to William Bayard Cutting (1850–1912) and Olivia Peyton Murray (1855–1949). He attended the common schools and Groton School and graduated from Harvard University in 1910 where he was a member of The Delphic Club. Shortly after graduation, he became an invalid due to recurrent tuberculosis and moved to Santa Fe, New Mexico at the advice of his doctors to restore his health. He became a newspaper publisher in 1912 and published the Santa Fe New Mexican, El Nuevo Mexicano, and the Santa Fe New Mexican Publishing Corporation from 1920 until his death.

During World War I, Cutting was commissioned a captain and served as an assistant Military Attaché of the American Embassy in London, England 1917-1918.

On December 29, 1927, Cutting was appointed as a Republican to the United States Senate to fill the vacancy caused by the death of Andrieus A. Jones.  He ran for office and returned to the Senate after only three months away. Cutting was re-elected to the U.S. Senate in 1934.

On May 6, 1935, on his way from Albuquerque to Washington, D.C., Cutting died in the crash of a TWA Douglas DC-2 in bad weather near Atlanta, Missouri.

Senator Cutting’s death was to have a national impact in that it would lead Congress to commission the highly controversial Copeland Committee Report on air traffic safety. 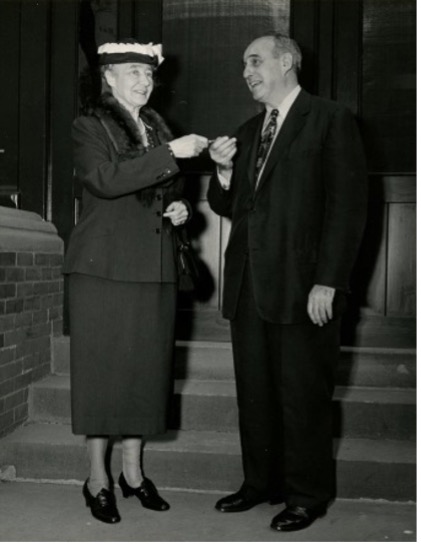 Olivia Bayard Cutting, Mr. Cutting’s youngest child, was born September 5, 1892, at Westbrook.  On June 11, 1917, she married Henry James.  Mrs. Bayard James, as she preferred to be called, dedicated much of her life to caring for her mother after her father’s death.  In 1951, Mrs. Bayard James made final arrangements for the take over of the family Westbrook Estate by the Long Island State Park & Recreation Commission with the supervision of a Board of Trustees.

It is due to these efforts and the generosity of Mrs. Bayard James that the property was opened to the public and became The Bayard Cutting Arboretum.  Above is a picture of Olivia Bayard Cutting handing over the key to the estate to Mr. Robert Moses, President of the New York State Council of Parks and the (LISPRC).  This must have been a rather touching moment for her, biding farewell to the place where she was born and grew up.

Over the next few years, she attended the meetings of the Board of Trustees.  Mrs. Bayard James died on March 12, 1963, at the age of 71.